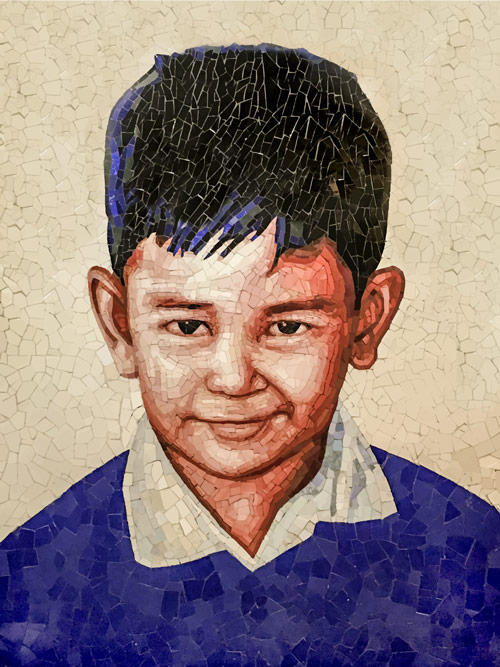 Sheikh Russel, the youngest son of the Father of the Nation Bangabandhu Sheikh Mujibur Rahman, was born on 18 October 1964 at the historical Bangabandhu Bhaban or now, the Bangabandhu Memorial Museum. Sheikh Russel was named after Bangabandhu’s favorite writer, renowned philosopher and Noble laureate Bertrand Russell, by Bangabandhu himself and Mother Sheikh Fazilatunnesa Mujib. Very active and playful from a very early age, Russel, was light of the family. However, life didn’t remain playful. He had to face the harsh cruelty of life from the age of one and half, when he had to visit Dhaka Central Jail and Dhaka Cantonment just to meet his beloved father. From cruelty, life soon became merciless. In 1971, he himself became an inmate of Dhaka Central Jail, just at the age of seven.

Youngest of the family, his world revolved around his father Bangabandhu Sheikh Mujibur Rahman, mother Sheikh Fazilatunnesa Mujib, sisters Sheikh Hasina and Sheikh Rehana and brothers Sheikh Kamal and Sheikh Jamal. Russel was assassinated along with his family members in a domestic and foreign conspiracy on the night of 15 August, 1975. He was then only a student of grade 4 of University Laboratory School.

“Tensions loomed before Russel’s birth. Kamal, Jamal, Rehana, Khoka uncle and I, were at home. Ma was with Boro Fupu and Mejo Fupu (paternal aunts). A doctor and a nurse came along with. Time seemed to had stopped. Jamal and Rehana kept on falling asleep only to wake up again. We stayed awake the entire night to welcome the youngest member of family. Mejo Fupu came out with news. We had a baby brother. Our joys knew no bounds. We couldn’t wait to see our baby brother. Mejo Fupu said she would call. Soon our wait came to an end. Boro Fupu placed him in my lap. A head full of thick black hair, fluffy fluffy cheeks, Russel was quite the healthy child.”
Source: Sheikh Hasina, ‘Amader Choto Russel Shona’

Among other topics, Bangabandhu wrote about Russel in his Karagarer Rojnamcha (prison diaries) on April 14-15, 1967 “When I arrived at the prison gate, I was surprised to see that little Russel was not standing outside”. When I entered the room and took him in my lap, he held me by my neck and called me “Abba! Abba!” a few times; and then went to his mother’s lap and started calling his mother “Abba! Abba!”. I asked “What is the matter?” His mother said, “At home, he keeps on crying saying “Abba! Abba!”. So, I told him to call me Abba”. Russel again started calling his mother “Abba! Abba!”. No matter how much I answered his call, he would bury his face in his mother’s shoulder saying, “You’re my Abba!”. It seems that he is upset with me. He no longer wants to take me with him when he leaves.”

In 1971, Russel and his family, including his mother and two sisters, were imprisoned in a house on Dhanmondi, road No. 18. His father Bangabandhu was imprisoned in a jail in Pakistan and his two elder brothers Sheikh Kamal and Sheikh Jamal had gone to fight in the liberation war. He was released on December 16, 1971, along with his mother, sisters and other family members. Russel came out of the house saying 'Joy Bangla'. Victory celebrations were going on out there.

On the dark night of 15 August 1975, Sheikh Russel along with his family members, was assassinated as a result of domestic and foreign conspiracy. He was then only a student of grade 4 of University Laboratory School.